Cool window displays — and eco-friendly, too 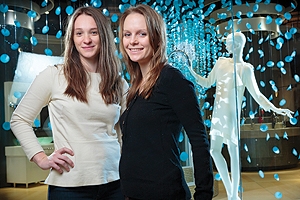 Shop owners often buy all sorts of stuff to create eye-catching window displays, only to toss it all out for the next season’s promotion. Most of the material that designers Crystal Hodges and Linsey Burritt employ for their retail clients never ends up in the trash or recycling bin. And most of the pieces were used to begin with anyway.

Take an installation that Mses. Hodges and Burritt, co-owners of Indo, made for the Gold Coast location of TeaGschwendner, a German specialty tea chain. Dozens of ill-fitting, plastic cup lids that couldn’t be returned to a supplier were strung imaginatively to look like steam droplets billowing from a suspended red teapot in the window.

“What initially drew me to Indo was their aesthetic, but when I learned about their environmental ethics, that was a really awesome bonus,” says Krista Kane, TeaGschwendner’s district manager.

Other clients include Delta Faucet and Brizo in the Merchandise Mart, Hotel Lincoln, Optimo Hats, 88 Brand Partners, Nordstrom, the Natural Resources Defense Council and the Art Institute of Chicago.

“At first, it was about not being wasteful, because visual merchandising in store window displays uses so much paper and other things,” Ms. Hodges says. “But we were also being really resourceful on tight budgets, finding used things on Craigslist and eBay and borrowing things.”

After college, Ms. Burritt worked as a freelance web designer and new product designer in Chicago. Ms. Hodges went on to earn a master’s degree in strategic leadership toward sustainability from Sweden’s Blekinge Institute of Technology and worked at RGLA, a retail design firm in Schiller Park. On the side, the two began collaborating on window displays for Niche Footwear, an edgy boutique in Wicker Park.

By 2010, there was enough demand (and income) for them to quit their day jobs and concentrate on Indo, which they named for the letters within the w’s of the word window. Mses. Hodges and Burritt say they completed 31 projects in 2013, almost twice as many as the year before. Revenue rose 79 percent from 2012, after a 33 percent increase from 2011, they say, though they decline to provide specific figures. The Near West Side firm has no full-time staff but hires interns and temporary help to install some displays.

They also have branched out to do interior projects. For a fundraising gala in October for the Art Institute’s photography department, they bought more than 27,000 used slides on eBay to evoke photography’s pre-digital days. They then built mini-pyramids out of the slides and mounted them atop photography light boxes as centerpieces running down the middle of long dinner tables.

“They used all this thrown-out stuff, but they made it really beautiful and elegant and it conveyed who we are,” says Elizabeth Siegel, associate curator of photography at the Art Institute.

This entry was posted in Uncategorized and tagged Art Institute, environment, Indo, recycled. Bookmark the permalink.