A relatively new Chicago sustainability engineering firm is in expansion mode to help shrink the carbon footprint of cities and buildings around the globe.

PositivEnergy Practice LLC was formed about 18 months ago by the three partners of architectural firm Adrian Smith & Gordon Gill Architecture and Roger Frechette III, who headed up the engineering department at Skidmore Owings & Merrill, another Chicago architectural design giant. PositivEnergy’s creation was inspired by an unsolicited “decarbonization” plan AS&GG developed for the city of Chicago recently. And the new group’s current growth stems from other countries and city governments showing interest in similar carbon-reduction plans. Those plans focus on reducing energy consumption and green house gas emissions within existing buildings. 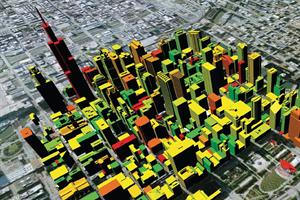 When the city of Chicago unveiled its Chicago Climate Action Plan in 2008, AS&GG decided to formulate a roadmap that offered layers of solutions for achieving the plan’s goals of dramatically reducing the city’s carbon dioxide emissions by 2030. In fact, Images Publishing released a book earlier this month entitled “Toward Zero Carbon,” which documents AS&GG’s Chicago de-carbonization plan efforts in detail. The firm was already well-known for other sustainability projects, including a design for a green retrofit of the Willis Tower in Chicago.

The formation of the separate boutique engineering firm has enabled staffers there to focus much of their work on advising building owners, universities and governments on making their existing structures more energy efficient and higher performing in a multitude of eco-friendly ways. The firm is working on the engineering component of new building projects, too, including a 2,000-foot-tall tower in Wuhan, China, a high-performing building in Russia, and new developments in India and Korea that will begin soon, according to Mr. Frechette, PositivEnergy’s president.

The early efforts of sending decarbonization proposals to city and country leaders around the world is suddenly beginning to pay off, with its first big client just signed in Malaysia, Mr. Frechette says. To meet expected demand, the firm expects to hire about 15 more engineers, computer programmers, software engineers and other high-level professionals over the next few months, which would double the current staff, he says. Mr. Frechette declined to provide revenues for PositivEnergy, but notes the firm is engaged in other energy-efficiency retrofits worldwide and sub-contracting work on new design project.

Crain’s met with Mr. Frechette to learn more about the firm’s decarbonization efforts and job opportunities in the field.

Crain’s: Why was the PositivEnergy Practice created as a separate entity from the AS&GG architectural firm?

Mr. Frechette: We all worked on new buildings before, but we believed it was more important to focus on existing buildings and city plans.The new firm was created in January 2010 at the tail end of the AS&GG Chicago decarbonization plan effort. The new practice could take that plan and carry it forward.

Our mission here is to move the meter in a positive direction. There is an incredible need to make buildings better. Our access to energy and fossil fuels and water is diminishing, and rapid population growth is putting pressure on all that. Most of the energy we consume as a world community is going into buildings.

We have a big opportunity to make a change to have buildings in the built environment that are more efficient and higher performing, use less energy, last longer, and create environments for employees that are happier and healthier and more productive.

How do you come up with the strategies to help clients achieve their lofty goals?

We get a great level of detail in our computer modeling, depending on the size of the project. We use existing data collection, we reconcile utility bills against our models to see what the impact might be with the changes we recommend.

We have a new tool we developed called an urban parametric model. It’s a virtual interactive database that collects information from every building in the set. Through a series of algorithms it will assess various strategies for change. Itwill home in on a particular set of strategies and recommendations from an energy perspective, financial perspective and carbon perspective.

We also have a strategic alliance with NASA to help us with our model. Through NASA, we get heat information to know which buildings could be improved through changes in their facades, roofs, etc. They also have very smart people there who will help us with writing of code for some of those calculations.

Has the firm been hired yet for another decarbonization plan?

We’re only 1.5 years old, but we have lots of proposals out there. Our most recent contract just awarded is in Malaysia for the city of  Putrajaya, the country’s seat of government. The sustainability plan will be for their government office buildings and the infrastructure that supports those buildings. It addresses water and waste systems, transportation, community engagement and an opportunity for renewable energy resources.

We’re getting really close with another one in Costa Rica. We met with the president of Costa Rica a couple months ago and she expressed interest in a plan for the entire country, with particular interest in the capital of San Jose. We also are having ongoing discussions with the city of Detroit right now and we’ve been asked to submit a proposal to Washington, D.C., by the GSA (Government Services Administration). I’ve been to Utrecht in the Netherlands, Madrid, Rome. This idea seems to be gaining a lot of interest. We’ve even been asked to create a model for the city of Shanghai, which has about 17 million people. That’s where you can make a difference.

What kind of growth do you anticipate within this new practice?

I’m projecting revenues and size of staff will double this year, but our goal isn’t to just be a large firm. We want to attract and retain the best and smartest professionals who want to work on reducing energy consumption, water consumption, reducing carbon emissions, and effecting change in a very positive way.