A citizen-driven website focusing on policy solutions for Chicago’s green economy and local sustainability issues just got a face-lift.

The website, Green Economy Chicago, was launched in May 2009 by then-1st Ward Alderman Manuel Flores and Mike Bueltmann, a technology specialist at Clear Content, a technology and business process consulting firm. Mr. Flores, who is currently chairman of the Illinois Commerce Commission, was inspired to create the site in response to his constituents in the Bucktown, Wicker Park and Logan Square neighborhoods who were clamoring for the city to be more active on the sustainability front.

Initially, the website was envisioned as a gathering place for Chicago residents and business owners to post ideas about how to boost the city’s green profile and reduce its collective carbon footprint, says Stephanie Katsaros, a member of the website’s current board of directors and a principal of Bright Beat, a Chicago sustainability consulting firm.

There were more than 3,500 unique visitors to the original website and 65 ideas were posted. More than 500 people collaborated on those ideas on the site. The digital community included green-minded Chicagoans, business owners and supporters from various organizations including the Natural Resources Defense Council, the Chicagoland Chamber of Commerce, the Illinois Institute of Technology’s Stuart School of Business and Baum Realty Group, to name a few.

The site recently was revamped to provide a stronger framework for encouraging individuals and businesses to turn their ideas into policy initiatives, Ms. Katsaros says. The souped-up version employs a voting platform created by IdeaScale, which invites people to post ideas and asks participants to vote on their favorites in a competitive process. The U.S. Environmental Protection Agency set up a similar format for generating citizen-driven ideas. 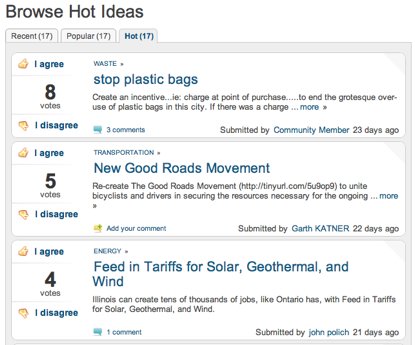 Ideas being discussed now on the Green Economy Chicago website

The person whose idea wins the top spot at the end of each quarterly voting cycle will be matched with an advocacy group or lobbyist to guide him or her in introducing that idea as an ordinance to the Chicago City Council, Ms. Katsaros says. A kick-off party to get the word out about the updated website is planned for Jan. 19 at Jimmy Fig’s Tavern & Restaurant.

Crain’s met with Ms. Katsaros to find out more about how business owners and others could benefit from participating in the 2.0 version of the site.

Crain’s: What’s the main purpose of the revamped website?

Ms. Katsaros: We’re hoping for participation and community engagement with a focus on being able to take ideas and move them to action by creating this policy suite. Instead of just having a platform for discussion, we created a tool that individuals and industry leaders can use to identify and refine good ideas that our policy suite will hopefully bring to action.

Crain’s: Can you describe the process of how a green policy idea posted on the site could potentially turn into an ordinance for the City Council to chew on?

Ms. Katsaros: First, you have to go to the website, register and submit your idea. Then comments are made by other members of the community. Some comments could include links to what people are doing in other cities; we don’t need only local answers to our issues. We also ask the NRDC and others to share information that specifically strengthens or informs certain ideas posted on the site. 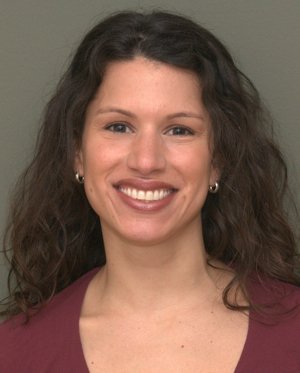 At the end of each quarterly voting cycle, the three most popular ideas win. Then the board will determine the idea that has enough support and the most likelihood of getting somewhere (legislatively). We’ll then have an empowerment session, give that person a one-on-one session with a lobbyist and coach them how to introduce their idea as an ordinance to the City Council. Any Chicago citizen has the right to do this.

Crain’s: What are the chances of an idea that originates on this site to actually turn into an ordinance that gets passed by the City Council?

Ms. Katsaros: That’s completely dependent on the ideas and the legislators and how it’s considered a priority among other issues we’re facing. We can look at other cities and look at ordinances that have been passed, for example recycling in San Diego and NY City. We’ll strategize with partners that have found success in other communities.

One good example of a strong idea was suggested by the Chicago Council of Carpenters during our first round of discussions on the website. They have ongoing efforts to grow the energy audit market here. They had an idea about requiring energy efficiency ratings on the sale of homes. We summarized the benefits, we know it could create jobs for home energy auditors, installers and others, and in the long term could reduce the cost of energy for homeowners. That would make a great ordinance.

Crain’s: How can the Chicago business community benefit from this site and participate?

Ms. Katsaros: Sustainable businesses or those moving in that direction can listen in on the discussion. Businesses that are working in sustainability should submit ideas because they’re the ones who know the benefits of being green. They could encourage the city of Chicago to put reforms in place to make it friendlier to be a green business, such as more energy efficient building codes or tax incentives.
Right now, the Midwest region doesn’t have a singular leader in the sustainable economy and green initiatives. There’s a huge opportunity in Chicago to bring industry here that supports sustainable business. This website has the potential to help make that happen. We have a reputation of being a green city. It would be nice to live up to that reputation.