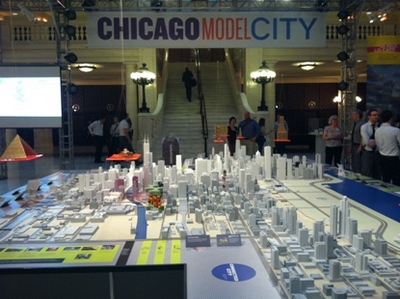 An exhibit of six green buildings designed by students at the Illinois Institute of Technology opened this month at the Chicago Architecture Foundation.

The six designs were superimposed on a massive white model city of Chicago already on display in the CAF’s atrium in the Santa Fe building on Michigan Avenue. The IIT contribution is part of a larger project of imagined designs from four Chicago-area academic institutions that was unveiled last Thursday, called “Unseen City: Designs for a Future Chicago.”

Tall buildings have the potential of offering greater energy efficiencies than low-rise buildings, in part because of their density. But designers can create structures that also meet environmental, physical and cultural challenges of the current century, says Gail Borthwick, a senior architect at Adrian Smith & Gordon Gill Architecture, and one of the advisers of the IIT project. Incorporating those other elements and imagining highly sustainable buildings was the challenge presented in a studio format to a group of 12 IIT students, who worked with Ms. Borthwick, and other mentors including professionals from the Council on Tall Buildings and Urban Habitat.

The students worked in pairs and developed six proposals for tall buildings in downtown Chicago that address central issues for construction of a more livable city. Some examples they came up with included the shuttered U.S. Post Office building reinvented as a “post waste” recycling center. Another design is called CO2ngress Gateway Towers, located at the Congress Parkway interchange. That structure has a connecting bridge between the two towers that’s equipped with carbon scrubbers to absorb carbon dioxide emitted from the thousands of cars driving underneath into the Loop each day. The captured carbon dioxide is fed to algae grown inside the building and is then processed into biofuel for residents in the building to power their eco-friendly cars.

The initial concepts for some of the designs originated from a pro bono project ASGG undertook when city officials asked the firm to imagine a vast overhaul of Chicago’s downtown area that could drastically reduce its carbon footprint, explained Ms. Borthwick, its project leader. That two-year effort between 2009 and 2011, called The Chicago Loop DeCarbonization Plan, was intended to help meet some of the goals outlined in the Chicago Climate Action Plan of 2008. The firm also published a book about that project.

Crain’s met Ms. Borthwick at last week’s opening to learn more about the exhibit and whether these buildings might ever rise up in Chicago’s built environment.

Crain’s: How do these student projects collectively address the question of how buildings can solve modern environmental problems that exist in Chicago’s downtown area?

Ms. Borthwick: Each student was asked to investigate the immediate physical, economic and social context of their chosen site and incorporate their response into their design. Each pair of students chose a specific environmental issue to address: water quality, education, air quality, food supply, waste, density. These all tie back to reducing carbon emissions and using less energy.

Crain’s: How did you and others serve as mentors for these students?

Ms. Borthwick: The students had one-on-one access to our team from CTBUH and ASGG three days a week. We also brought in specialists to consider urban issues, engineering and structural systems and environmental strategies. We’d go through their ideas, which gave them a chance to formulate their story and refine it as they went along.

Crain’s: What’s the likelihood of these designs ever seeing the light of day? Or was the intention for them to be thought-provoking so other architects might incorporate these concepts into future sustainable building designs?

Ms. Borthwick: While the sites are existing sites and the projects quite feasible, the intention is really to encourage architects to pay attention to elements of design beyond just aesthetics – to show that consideration of density, urban issues and environment can be intertwined into the design to make a stronger, more successful architectural project.

This is the direction our profession needs to go. In tough economic times, architecture needs to evolve to consider not only the aesthetics of a building but also its economic and sustainable viability. If you take a project to a developer and show all these elements, there’s a much better chance the project will be built.

Crain’s: Are any of these student designs economically feasible?

Ms. Borthwick: Some of the teams considered the financial feasibility in depth. Others were more considerate of the needs of living in the downtown core. As always, the projects need support of the city — tax breaks, financing, code zoning — and in most cases, an interested developer.

Crain’s: Does Mayor Rahm Emanuel’s agenda for promoting public/private partnerships to encourage green building solutions in Chicago create any opportunities for these proposals or other ideas in your firm’s decarbonization plan?

Ms. Borthwick: Certainly the mayor’s infrastructure trust program can be investigated to move forward many strategies in the DeCarb Plan – not just new and existing buildings but particularly mobility and infrastructure strategies. We’re continuing to work with the mayor’s office to identify buildings that want to do deep retrofits. The city announced a short list earlier this month of 14 buildings in the Loop and just north of there that signed on to the mayor’s energy efficiency initiatives.

In fact, there’s a symposium this week (Thursday) at Willis Tower where building owners and property managers will share success stories of energy efficiency retrofits, including someone from the Merchandise Mart.

This entry was posted in Green Scene. Bookmark the permalink.