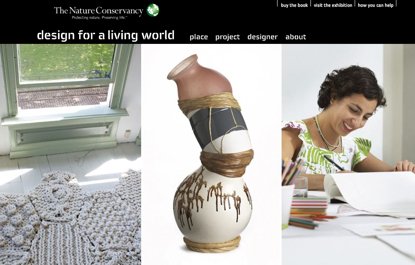 The Field Museum is kicking off a new exhibit Friday that will feature items made from sustainable materials and created by 10 designers from the worlds of fashion, furniture, textiles and home products. The designers, including fashion icon Isaac Mizrahi, architect Maya Lin and graphic designer Abbott Miller, were asked by The Nature Conservancy to take raw materials from specific parts of the world and craft items out of them with conservation in mind.

The exhibit, “Design for a Living World,” marks the first display in the new Gary C. Comer Family Gallery within the Field Museum. Going forward, exhibits in that gallery will focus on environmental sustainability, conservation of biodiversity and climate change.

The current exhibit includes finished samples of the designers’ creations, video installations of the creators explaining the process of their work, and drawings and samples of the raw materials tapped for their assignments, explains Janet Hong, the Field Museum’s project manager for exhibitions.

An Isaac Mizrahi dress made from tanned salmon skins

As you enter the gallery, one of the first items in view created by Mr. Mizrahi is a stunning white dress and matching long jacket made of thousands of tiny paillettes, hanging on a mannequin. A glamorous pair of high-heeled shoes made from the same material and studded with rhinestones are enclosed in a nearby glass case. Behind the dress is a wall of large, close-up photos of salmon and water flowing in winding rivers and streams. Upon closer inspection, visitors may be surprised to learn the dress is made of tanned salmon skins from fish caught in Alaska, explains Ms. Hong.

Other items in the show are drawn from more familiar sources, like sheep’s wool for a rug, but rendered in a new way to be more mindful of its origins, says Ms. Hong. Dutch textile designer Christien Meindertsma used organic wool from sheep living on a farm in Iowa. What’s different here is Ms. Meindertsma knit separate large patches of wool from individual animals and labeled the backside with their names before stitching the pieces together into a rug. Photos of the sheep and samples of their wool are displayed alongside the patchwork rug in the exhibit.

The designers also include Yves Behar, Ted Muehling, Paulina Reyes, Ezri Tarazi, Stephen Burks and Hella Jongerius. Some of the materials were sourced from protected areas of nature from as far away as Australia, Bolivia, China and Costa Rica, and as close by as a prairie preserve outside of Rockford, notes Ms. Hong.

In connection with the exhibit, the museum’s annual Comer Symposium on May 19 will feature a free lecture on climate change and the future of sustainable design given by local architects Adrian Smith and Gordon Gill, as well as designer Mitchell Joachim. Mr. Smith and Mr. Gill’s namesake firm is known for its high-profile eco-design projects, including the green retrofit of Willis Tower currently under way in Chicago, and their design of one of the largest buildings in Masdar City, a net carbon zero city under construction in Abu Dhabi. Mr. Joachim is known for his futuristic designs, including a car made of plastic and Fab Tree Hab, a living tree house.

The Design for a Living World exhibit, which travelled to Chicago from the Cooper-Hewitt National Design Museum in New York, will be at the Field Museum through November 13.

The museum’s Ms. Hong gave Crain’s a sneak peek at the exhibit before opening day and talked about its potential impact on local designers.

Crain’s: Can you describe the purpose of the exhibit?

Ms. Hong: The Nature Conservancy matched up different raw materials with different designers and asked them to produce something new with it or make something in a way that hadn’t been done before. One of the main goals of the exhibit is to raise awareness among consumers and other designers of where materials come from and how paying attention to sustainability doesn’t have to compromise the beauty or usefulness of the objects created.

This exhibit also demonstrates how people who think about the supply chain can take one more step and take items from sustainable sources, like wood from a forest where clear-cutting isn’t taking place.

What kinds of materials were used in some of the designs?

Mr. Mizrahi used salmon skin, which is often thrown away as a by-product of the fishing industry. It can be tanned to create a leather that is naturally a creamy white color and, by the way, doesn’t smell like fish. Salmon leather is actually stronger than that made from cowhide, and the process to tan leather does not use lime — a potentially toxic chemical — since fish scales are easier to remove than hair. It’s not something that can easily be replicated, but it shows the possibility of a beautiful product that can be made with something that most people throw away.

One of my favorite items is a cocoa grater for making hot chocolate that was created by Swiss designer Yves Behar. It’s a simple tool made from sustainable wood on a farm in Costa Rica. It’s shaped like a twig and has a metal grater attached at the end of it. It can hook nicely onto a cup and is something that a manufacturer could see and possibly be interested in making. It also comes with an organic cocoa patty from the same cocoa farm in Costa Rica. It has its own little pouch that Behar designed to look like the jute bags used to ship the cocoa to Switzerland and other countries. 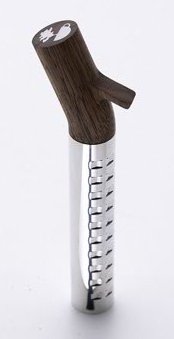 Some works in the exhibit are more experimental. Hella Jongerius used chicle latex (pronounced cheek-lay) harvested from chicle trees in the Yucatan Peninsula and experimented with it to make vases and other things. It was very challenging to work with and she made many attempts to create objects or uses that didn’t quite work out. It’s up to others to take that material and work with it to see what kinds of things they can come up with. Think of what’s happened to bamboo over the last 10 years. Initially we saw chopsticks made from bamboo and not much else. Now there are so many things: clothing, flooring, home products. The same could happen with chicle latex.

Were any of the items on display derived from local sources in the Midwest?

Yes. Christien Meindertsma created a book with each of the 49 pages of paper made from a different native prairie plant found in the Nachusa Grasslands, a prairie preserve outside of Rockford. She also knit a huge rug from organic wool that came from sheep on a farm in Iowa.

How can local product designers (and manufacturers) be inspired by this exhibit?

This exhibit can show that there are probably so many things we throw away that could be used to make more products. And there are more raw materials that we can think about using, too.

In the Field Museum, we know that native peoples knew how to make so many things from sources in their environment and they developed the techniques to make them. Now we’re looking back at what some native peoples used in the past to see if we can make new things out of them today.

Isaac Mizrahi in his video interview talks about the economic benefit of thinking about the sources of the products he creates. If he had to balance ecology and glamour, he says he gives them equal weight. You shouldn’t have to sacrifice one for the other. There’s a reason why he’s built such a successful empire.

What do you envision as the potential long-term impact of a show like this on product designers, manufacturers and consumers?

It can encourage designers and manufacturers to think of the front end of the process. Materials don’t have to be organic to come from natural sources. So when you use a tree not taken by clear-cutting a forest, the manufacturer is making products that come from sustainable sources.

Many educated consumers already think about where their food comes from. By seeing this exhibit, consumers might begin to ask the same questions about where the materials come from in many other things they buy for their home or in their clothing.