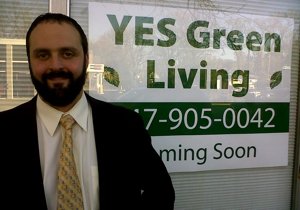 Mr. Furlett has spent the last three years selling water-conservation retrofit programs to multifamily building owners in Chicago, Evanston and parts of Wisconsin through his YES Conservation. He learned about water and plumbing matters while working at his family’s home kitchen and bath supply company in the late 1990s. But Mr. Furlett, 33, found a way to blend his beliefs about reducing waste with his technical water knowledge by launching YES Conservation in 2007.

Last year, Mr. Furlett installed water plumbing retrofits in 1,200 apartments, and he expects to complete about 1,600 units by yearend. Mr. Furlett declines to provide specifics but says revenue has risen 200% each year. Building owners buying the retrofits are reaping early benefits, too — Mr. Furlett says they get a return on their investment in a year or sooner.

Water experts warn our planet is running out of clean water and we need to be more mindful about conserving the fresh, clean water that’s still available. Water supply issues already are an urgent matter in other parts of the world, but the U.S. Environmental Protection Agency states at least two-thirds of the U.S. has experienced or is on the brink of having local, regional or statewide water shortages.

To spread his message of conservation and grow his business, Mr. Furlett wanted to widen his customer base to reach the single-family homeowner market. He intends to do that with YES Green Living — his storefront on Central Street.

Crain’s got a sneak peek of Mr. Furlett’s store this week.

Crain’s: What’s the biggest source of water that’s wasted in an apartment or home?

Mr. Furlett: The biggest water wasters are humans, hands down. What we do is retrofit the shower heads and the aerators inside the toilet tanks. Those are places where you can save quite a bit of money, and we found inexpensive ways to do that. We have pieces that help our toilet flush the same way but reduce the amount of water lost on the fill, which most people don’t even know about. You can have a 1.6-gallon-per-flush toilet, but you’re really using three gallons because you’re losing an extra gallon-and-a-half on the fill.

We end up saving building owners 6,000 gallons of water per user per year, and if you do the kitchen, it’s an extra 2,500 gallons of water savings per year. Depending on how much your water bill is, it’s about a one-year return on investment for one user. If you have an apartment with one bathroom and three users, your return on investment is going to be even better.

Crain’s: What’s the most dramatic way people can save money by cutting back on water usage?

Mr. Furlett: You can make the most significant savings in the shower, and you don’t need participation from the user. I’m lowering their water usage whether they participate or not. If you installed a new shower in the last 10 years and didn’t make these changes, you’ll save some money with our retrofit program. If your building is older than that, you’ll save even more money.

We have a service called a “water return calculator” where we can plug in figures and show you what you can expect to save. We also have a product called Leak Alert where we monitor water usage once the retrofits are done and will notify the building owner if we see any sudden increase. That could mean there’s a leak somewhere in the building. Small leaks can really add up in a water bill if they’re not found and fixed right away.

Crain’s: Why are you opening a store to expand to the single-family market when your multifamily housing sales have been growing at a healthy clip?

Mr. Furlett: I’ve always wanted to sell to the single-family market, but they really want to see and touch and feel what they’re doing, especially when it comes to something that will affect their lives on a daily basis, like showering, usage of lights or energy consumption. Single-family homeowners want to be more involved in understanding these things, but without having a store to show people what we’re doing, it was pretty hard. We tried to break into that market before with letters and ads, but it didn’t work.

We also know that most of us don’t have the time to do all the research about how to conserve water and energy usage in our homes — we don’t even want to look for it online. Most people think renewable energy involves huge solar panels and wind turbines, and they think it’s out of their reach.

The impetus for the retail space was to show them there’s lots of stuff they can do. It’s a museum idea — we want people to come here to learn first, then remember us when they’re ready to buy. We want to encourage people to start with small baby steps and show them how they can overcome the disconnect between excitement and doing something about it.

Crain’s: Are water-conservation programs going to be the main emphasis of this store or do you plan on demonstrating and selling more than that?

Mr. Furlett: Water conservation won’t be the biggest piece, but it will be easy to show people that water conservation is inexpensive and very effective. We plan on doing a lot of education here. We’re building a small eco-house display with a solar panel on it and a water-conservation toilet inside. With this house we’re bringing the roof line closer to the eye so people can see a photovoltaic solar panel up close. There will also be a small display of a wind turbine. The water-conservation toilet on display will be a working toilet on a base, and you’ll be able to see it actually flushes. We’re debating whether we’ll have things to flush.

Throughout the store we’ll have lots of different services and products people can learn about and purchase. We’ll have $600 solar panels to a $9 bracelet made out of a bike spoke. We found lots of great eco-gifts. We have purses made out of gum wrappers that are weaved together beautifully. We have tote bags made from burlap coffee sacs and old vinyl record albums re-purposed into bowls.

We have tile and outside pavers from Earth Stone Midwest that recycle granite products that would have been thrown into the waste stream. We’ll also have small pieces of used furniture that were repainted because we like the idea of up-cycling things. We’re also creating a kids educational program called Eco-Heroes, and we’ll have adult workshops on renewable energy, indoor air quality and how you can get tax credits on various energy programs.

Crain’s: Do you have other expansion plans beyond this store that’s opening next week?

Mr. Furlett: Our five-year plan is to take this retail piece slowly and then expand it to other markets like Evanston, where there’s an eco-minded community with people who are somewhat affluent but very busy. We do all the footwork for them and focus on being a neighborhood-based store. The idea behind renewable energy is that it pays itself back, but you’re asking people to pay upfront so we need to be in places that are affluent.

I wouldn’t do this in California because it’s already happening there. It’s not so prevalent in the Midwest and other places. I plan on testing this in Madison, (Wis.), and we’re looking at Ann Arbor, Mich., and Austin,Texas.