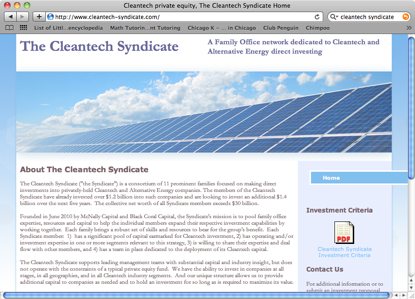 Eleven wealthy families are now scouting for investment opportunities in the clean-energy sector – and the investment syndicate they’ve formed has already inked some deals.

The Cleantech Syndicate was created in 2010 but only announced its formation late last month after it accumulated a large enough membership and demonstrated some investment clout. That’s according to Ward McNally, managing partner of Chicago’s McNally Capital LLC, one of the family fund members and a co-founder of the syndicate with Black Coral Capital, a clean-energy investment firm with offices in New York, Boston and Montreal. Mr. McNally, a member of the Rand McNally & Co. clan, is overseeing the Cleantech Syndicate out of his Chicago office. He wouldn’t identify the other participating families.

Since the syndicate’s launch, two new investments have already closed and three are currently pending, Mr. McNally notes. Syndicate members aren’t pooling their capital into one common fund but will be sharing information so they can benefit from a broader view of investment opportunities. They intend to invest $1.4 billion in the clean-tech sector over the next five years through their own separate family funds.

McNally Capital, Black Coral Capital and other participating family funds have previously invested $1.2 billion in various subsectors of the clean-tech industry over the past five years. Those areas include wind and solar, energy efficiency and water. There’s also been lots of interest in smart-grid technology, geothermal and biogas, Mr. McNally says.

So far, 11 U.S. family investment funds representing a collective net worth in excess of $30 billion are part of the national syndicate, and there are plans to increase that total to 15. A separate European affiliate is in the works for later this year. The syndicate declines to identify the families participating.

Crain’s: What role do you play in overseeing the syndicate?

Mr. McNally: McNally Capital is acting as the hub of the spokes of families in the syndicate. As managers, we’re sourcing, screening transactions, developing strategic relationships with corporate partners and investing in this space as well. We have a dedicated web portal where deal flow is shared. Everyone in the syndicate gets access to that information and then makes their own investment decisions.

Crain’s: How did the managers decide which families to invite into the syndicate?

Mr. McNally: There are no two families (in the syndicate) that invest exactly alike. We didn’t want to have a bunch of families that have the same investment policy toward solar or wind power, for example. We wanted very different investment profiles. The families already have experience in almost every subsector of clean tech and invest in everything from early-stage to late-stage companies.

The common theme is they have invested capital in the clean-tech sector, have a team in place and have capital directed to future investments in clean energy. By having all these different knights at our round table, we have a group that can all benefit from each other’s investment ideas. It runs wide and deep, instead of narrow and deep.

Crain’s: Do you already have investments lined up for Chicago-area or Midwest companies?

Mr. McNally: There are two or three companies that are already within the portfolios that are based in the greater Chicago area, but no new investments have been made locally since April 2010. There was one recent investment in Indiana in the biogas subsector.

Crain’s: Do you think there’s a good crop of local clean-tech companies already around to invest in?

Mr. McNally: It’s definitely increasing. The awareness to the base of what’s here has increased substantially, a lot of that is thanks to Amy Francetic and the Clean Energy Trust (she’s executive director of the organization).

Crain’s: What are the prospects for more private-equity investments in the local clean-tech sector in the near term?

Mr. McNally: There’s been increasing activity in Chicago and generally in the Midwest in this sector for a number of reasons: large prominent universities putting out new technologies in solar, advanced materials and energy efficiency. Having Argonne National Labs in our backyard is a huge contributor to the energy sector in general. This area has a lot of activity in bio-agriculture, bio-mass and bio-fuels so people think of Chicago as a point of reference for those types of transactions, too.

And it’s amazing how the Groupon effect is bringing in venture-capital dollars in general, not just for social media.

Crain’s: Did these family funds join the syndicate to pursue their interests in sustainability or a desire to promote a shift to renewable energy sources?

Mr. McNally: Their objectives are as much about (spurring) new technologies as it is about good return on investments. As a result of all the funds being large scale, some families have lots of activities going on in other sectors and many also own large operating companies. One reason some are interested in clean energy is it’s also a driver for other things they’re doing within their business operations.

For example, there‘s a family that owns a tremendous amount of commercial real estate and they’re interested in energy efficiency. They look at new technologies to implement into their buildings to reduce their costs or achieve certain LEED (Leadership in Energy and Environmental Design) standards, and reduce emissions too. At the same time, the family believes they’d benefit by having an equity stake in those companies.

Also, families started to invest in clean-energy equity funds, but they felt there was a mismatch in the duration to achieve their own investment objectives. Typical private-equity funds might hold an investment for four to five years. Family funds may want to hold onto stuff longer, or indefinitely. Some solar projects might have 15- to 20-year horizons, which makes sense for some of these family funds to invest in directly.