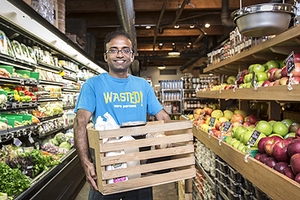 Mr. Karmani had planned on earning a doctorate in computer science from the University of Illinois at Urbana-Champaign and jetting off to Silicon Valley to join Google Inc. But on his way to campus each morning, he would stop by an Einstein Bros. Bagels for breakfast. One day, the franchisee shared his frustration over throwing away fresh food every day when nearby soup kitchens would be thrilled to serve it to their patrons.

So in 2012, a year before completing his Ph.D. studies, he launched a for-profit business called Zero Percent. Its product is an app that permits restaurants to list their leftover food and sends text alerts to food pantries about what’s available. The cloud-based program tracks donations so restaurants can record them as tax deductions.

The Einstein Bros. franchise logged $1,000 in charitable donations in less than a year and expects to hit $3,000 this year, says Mr. Karmani, Zero Percent’s CEO.

An estimated 40 percent of all food produced in the U.S. is wasted, according to the U.S. Department of Agriculture. “Our goal is to take 40 percent food waste and bring it down to zero percent by feeding hungry people,” says Mr. Karmani, 31, who was born in a region of Pakistan where food shortages are commonplace.

WASTE NOT
Feeding America, a national nonprofit based in Chicago, licensed the platform last year and rolled it out in 10 cities. (The deal has since ended.) In Chicago, more than 30 businesses have become food donors, including Eataly, Hannah’s Bretzel, Sopraffina Marketcaffe and Olivia’s Market. Nationally, food-service giant Sodexo USA Inc. signed up in June. Food partners pay $30 monthly, but eventually the fee structure will shift to a percentage of net tax savings, he says.

More than 25 nonprofits in Chicago receive donations through Zero Percent, including Franciscan Outreach in Wicker Park and the Pacific Garden Mission in the South Loop. About 1,000 pounds of food is donated each day in Chicago; that’s expected to rise to 10,000 pounds daily by year-end, Mr. Karmani projects.

The Goddess & Grocer gives away mostly prepared foods, such as salads and desserts, says Meghan Shank, marketing and product development manager at Bucktown-based Goddess Restaurant Group. “We’ve also been enjoying the perks of the partnership by marketing our green initiatives to customers,” she says.

Mr. Karmani started the business with $15,000 in savings. He moved the company to Chicago last fall when it was accepted into Impact Engine’s 16-week accelerator program. In exchange for a 7 percent ownership of the startup, Impact Engine gave Zero Percent $25,000 and guidance. In June, he received $220,000 from angel investors.

“I love Raj’s passion,” says Chuck Templeton, Impact Engine’s chairman. “He’s trying to tackle a massive problem that’s daunting to anyone, but he’s got the audacity to try to make it happen.”