Originally published in the Chicago Tribune 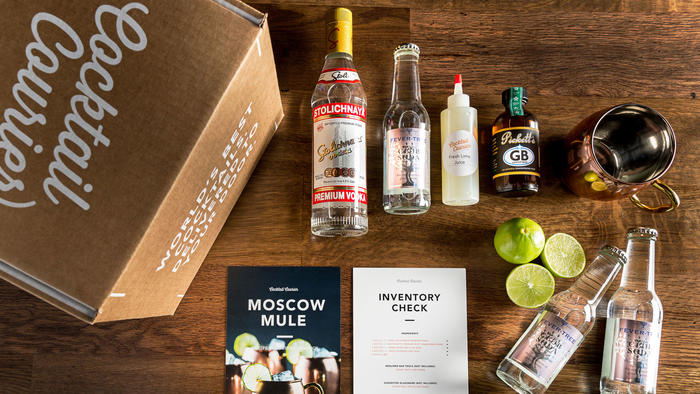 Baby it’s cold outside, and a new online cocktail delivery service wants to bring drinks — Chicago mixology originals — to your home, where you can stay warm and cozy.

Cocktail Courier, which launched Tuesday in Chicago, says each delivery  contains all the spirits, liqueurs, mixers and fresh garnishes for four to six drinks designed by a bartender at one of the city’s hip and trendy bars and restaurants.

Scott Goldman said he and his brothers Curt and Ryan launched the business about two months ago in New York City and saw Chicago as a natural second market. They plan to keep expanding with interstate deliveries from Illinois in late March and a rollout in the San Francisco market later in the spring.

“We’re living in a golden age of cocktails,” Goldman said. “As much as the consumer has shown an appreciation for well-made drinks, most of us are also relatively inexperienced and intimidated when it comes to making great cocktails at home.”

The company’s booze-in-a-box concept aims to demystify the process with serving recommendations, instructions for measurements and details on how to mix and shake the ingredients in the proper order, Goldman said.

Initially, the delivery area will cover the Loop, north to Wrigleyville and west to Logan Square. The company aims to expand beyond those boundaries in the coming weeks, Goldman said.

Customers can order one-time deliveries a la carte or sign up for a subscription that sends a weekly package to their door. Prices range from $36 to $90, depending on the recipe. Prices include tips to the bartender who designed the drink, and deliveries include premium brands and artisanal varieties, Goldman said.

Customers visit the company website and select from among available custom cocktails. As of early Friday, the Chicago service offered five cocktail options, three of them from Chicago bartenders or bar managers — Matty Eggleston of Nico Osteria in Gold Coast, Peter Vestinos of The Betty in West Loop and Liz Pierce of The Drifter in River North.

“It’s a great promotion for the bartenders and the bars where they work,” said Vestinos, who created his version of the Old Fashioned for the first round of offerings.

Vestinos, whose company The BarMedic provided consulting services to Cocktail Courier, said he thinks the format “puts the bartender forward, and the consumer makes a connection to that person within their own home.”

Goldman said he and his brothers found the bar business right for them because their parents for years have owned bars and restaurants around Philadelphia. Cocktail Courier follows their first bar-related venture, Shakestir, a four-year-old international online community for bartenders and managers to post portfolios and connect with others in their business.

For Cocktail Courier, Goldman said, he and his brothers invested their own savings and then tapped friends and family for additional funds. He said they’ve had Chicago on their minds for a while.

“With such a great culinary scene here and vibrant cocktail market, it made sense that Chicago would be the next city on our radar,” Goldman said. Besides, he said, “Chicago people have more square footage in their homes compared to New York and they host more parties.”